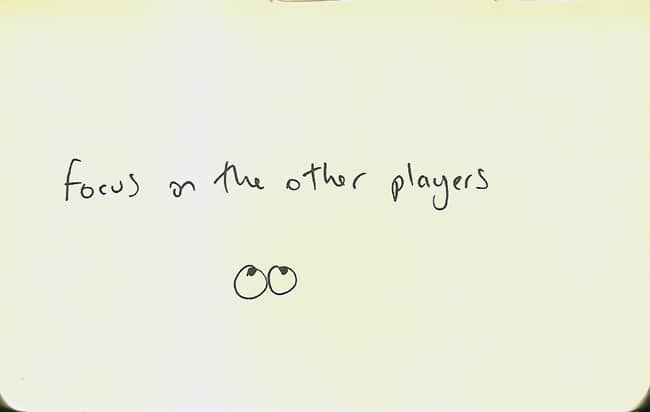 Focus on the other player (s)

How do you know?

And it may or may not work.

The point is, if you do it that way, you learn stuff about the people that you play with. If you play your ‘hot shit’ you learn nothing; you’ll already know what you’re going to sound like because you worked all day on drop-2 voicings, or something.

How do you focus on the other player?

One way is to literally focus on the other player. Using a visual connection can focus your listening and attention, as well as providing important visual clues as to what’s happening musically. Some people like to close their eyes. Maybe one eye open is the answer ;)

If you know someone pretty well, try to lock eye contact when you play. It can be quite weird to do that as it feels so intrusive, but try it.

Say you want to lock in with the time-feel – maybe look at the drummer’s hi-hat or ride-cymbal beat, or maybe the bass player’s fingers. Maybe if you’re playing duo, look at each other’s fingers. Just try stuff, see what happens.

Also try this kind of thing when you’re soloing. It can get you out of that ‘Stand Back – I Am Emoting’ vibe. Not that there’s anything wrong with the occasional messianic moment (read – entire gig) of glory-laden fretboard heroics.

Yeah, actually forget everything I just said. Turn that wind machine on and let’s have it…