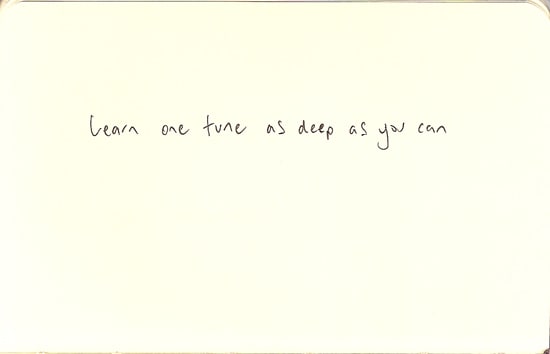 Take your favourite tune and learn everything you can about it. I’d say just do one tune. It’s enough. Some of these jazz purist types say learn the words to all the standards, but I think my ear hair isn’t fully developed enough for that yet. Maybe in the next lifetime.

But they do have a point. You can get ideas from lyrics. Ideas for arrangements. For instance, there’s this Emily Remler version of Softly as in a Morning Sunrise where she re-harmonises the A sections with an ascending and descending progression. Maybe she took that idea from the lyrics which go from ‘sunrise’ to ‘sunset’? Who knows?

So long as you use the idea to get ideas – to do things, then that’s ok by me.

Take Dido’s Lament, for example. You might imagine the repeated ground bass as depicting the descent into the grave. The vocal melismas are like dying sighs. The minor key, the slow pace, the chromatic tensions. It’s the greatest melody ever written. But, don’t stop there. Use that stuff to make something. Get deeper into it. The more I delve into a piece in these ways, the more I feel it. Or maybe, the more meaning I create in it.

This also works well for your own pieces. If you’re stuck on a composition, you can invent meaning into a piece and let it grow. Let the meaning take over, become bigger. That technique usually sparks ideas for me.

What else could you do?

Has learning something about a piece affected how you feel it, affected the meaning for you?