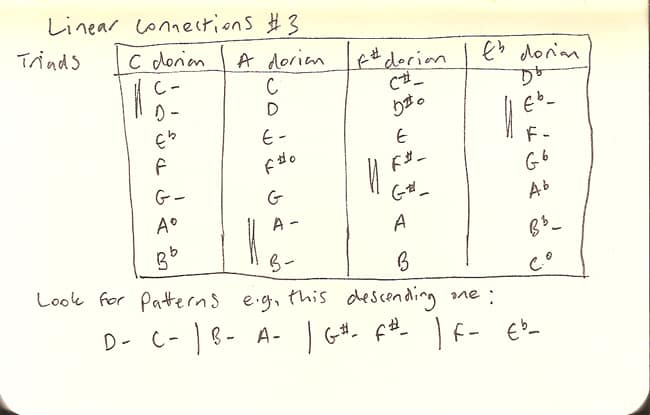 Same chord progression as before: C-7 A-7 F#-7 Eb-7. But this time applied to the available triads within the Dorian mode.

Maybe you could arpeggiate the chords to make a line? Notice the pattern that the descending minor triads makes: two triads that are a tone apart (D- and C-), and when you change chord (C-7 to A-7) the link between the triads is a semi-tone C- to B-). Allusions to the diminished sound, maybe. Maybe you could mix the dorian triads sound with the diminished sound. Maybe you could use the triads that are the wrong ones for a chord (for C-7 that’d be A- B- F#- G#- Eb- F-) and resolve them to diatonic triads, using that idea of a way of getting an unusual sound that has some semblance of organisation in it. Or maybe just a start point for something to mess about with until you find something interesting.