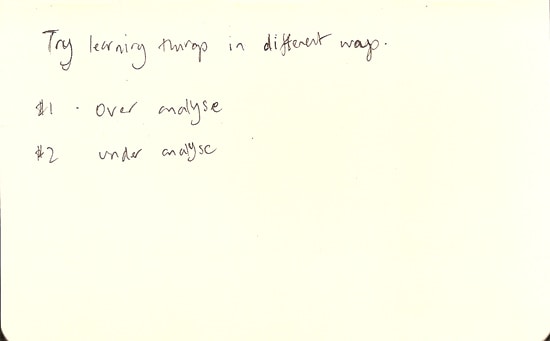 Learning is an experiment. When I’m learning something I try to think about how I’m going about the learning. So I try many different approaches. I learn different things from different ways of doing things.

This might mean just listening but not trying to work anything out like the key/form/chords/time/etc. Just listen to it and that’s enough.

As a musician, it’s a natural thing to be drawn to wanting to figure out, analyse and deconstruct music, but I also think it can be just as nourishing to listen without an agenda.

There are (I think!) ways that music affects us that we don’t have to understand or analyse. Intuition, feeling, and so on. And this can bleed into the playing too.

This might involve figuring out what string someone played something on, finding out everything you possibly can about a performance, or figuring out the elements of a style.

I really love this solo of Lennie Tristano’s called ‘Line Up’.

It’s a famous recording for a number of reasons: it’s an overdubbed solo, it’s sped up, it was controversial at the time, there’s tons of rhythmic and harmonically interesting things, and it was made in 1955! I’d encourage you to read more about it. Maybe start here: http://www.lennietristano.com/

So in order to understand this, I’ve listened to it many times at different speeds and pitches trying to learn more about the making of it.

Here’s what I think Lennie was hearing as he recorded this. It’s half speed, and shifted down one octave:

Anyhow, there’s this bit at the end if you turn the volume up and listen to it shifted down one octave, you sort of hear a chair creak or a shuffling around, like Lennie is getting up from the piano and heading over to press stop on his Ampex machine in his home studio.

It’s there that I hear a voice say ‘now that’s…’, or maybe, ‘not bad’. Do you hear it? Maybe there are people around who knew Lennie’s voice who could say for sure that that’s what’s there. But it might just be some coincidental frequency mullarkey. You can hear it at about 0:09 on this clip:

The point is that to listen to something in this kind of detail is different from the other way. You learn different things.

I think both are essential. A balance and interaction of chaos and order.

I wouldn’t want to just do one and not the other.

Maybe you’ve looked at something in detail and you’ve discovered something. Well fess up! Share it in the comments section below.

Aside from listening to the recording of Live Up in that way, there’s also the musical content that’s up for analysis.

It’s much easier to notate detail, or one’s notational imagination by hand than it is through the limit of a pre-programmed bit of kit; in this case, Sibelius. I should point out, also, that some of the rhythmic notation was influenced by Eunmi Shim’s transcription of ‘Line Up’ in her fascinating book: ‘Lennie Tristano: His Life in Music‘.