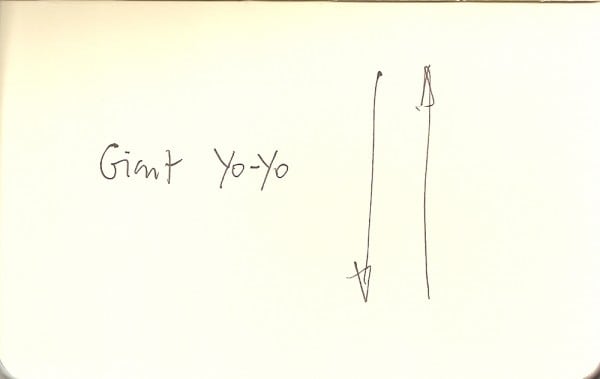 It’s basically a Yo-Yo of a chord progression; it goes down and then up.

Giant Steps arranges three major keys – B, G and Eb, in a cycle. The cycle, starting on B, goes B, G, Eb, B. It starts on B and ends on B. That’s why it’s called a cycle. The keys are evenly spaced in intervals of a major third.

There’s a little kink in how Coltrane uses it in Giant Steps. When he gets to the Eb, he pauses and jumps back to G and completes the cycle from there. 3 steps forward, 1 step back, 3 steps forward. Or if you prefer a picture, imagine the Mark of Zorro, or a bolt of lightning. Ok?

Then he plays a V to start the cycle at B all over again, so that’d be F#7.

In even simpler terms: If you forget about the actual chords, then starting high on the neck, move your hand down to the end of the neck, then back up again.

And that’s sort of how Giant Steps goes.