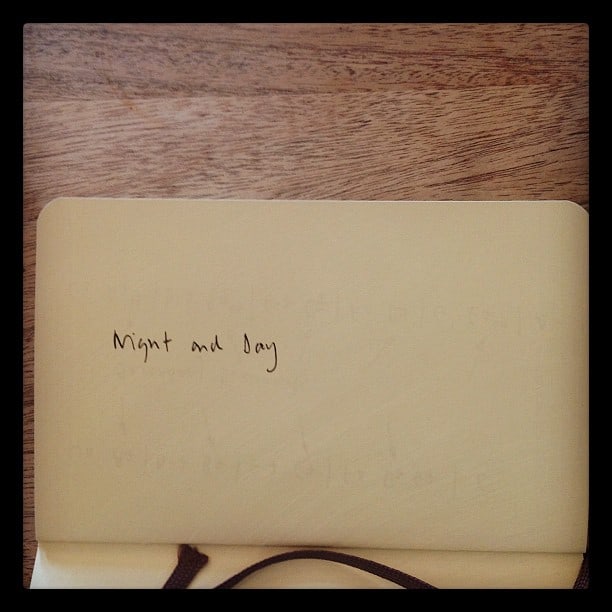 Lurking within the tunes that you already play are ideas waiting to be used.

Take the standard Night and Day for example.

A common way to approach improvising on tunes like this is to work out what key it’s in, look at the chords and figure out what scales to use. But pretty soon, all your improvisations and arrangements begin to sound the same. The same sounds, the same licks, the same SOLO.

It can be incredibly interesting to look deeper into the tunes we play – analysing them, forming opinions about them, watching the films, reading the screenplays, the radio plays, the novels, reading about the composers, learning more of their tunes, and listening to the classic versions of the piece. Think of it as plotting a line from a tune you might’ve first learnt from a jam session back to the original – and seeing if you can spot points along that continuum that affect the way you see it now – e.g Miles Davis’s interpretations, The Real Book, etc. Using this approach you can get so many ideas to form a deeper relationship with the music.

Now Night and Day is full of opposites.

Maybe* Cole Porter took the idea of obsession and this is what he came up with.

The singer, Fred in the video, is obsessed with Ginger.

So Mr. Porter uses repeated notes, mirroring that feeling. He’s thinking about her all the time – ALL NIGHT and ALL DAY! Those crazy 30s types :)

The melody to the Night and Day part basically starts on a Bb and goes down a minor third to G. When it moves to the bridge, the melody goes the opposite way, Bb up a minor third to Db. (Note – Night And Day is in Eb Major, this video is a bit sharp, but the original sheet music is in Eb so let’s stick with that)

The chord progression goes: Cb∆ Bb7 Eb∆. Some people use Fm7b5 Bb7 Eb∆. What’s going on there is the Fm7b5 or Cb∆ are being borrowed from the parallel minor key: Eb minor. It’s a device called Modal Interchange.

The modulation in the bridge goes to Gb major, which is the relative major of Eb minor, and switches between Eb and Gb major, so it’s still sort of moving between Eb major and Eb minor.

The lyric uses opposites too:

Melodically, you could say he pits the use of repeated notes (the intro and start of the A section) against the descending chromatic melody (‘whether near to me or far it’s no matter darling, where you are, I think of you’).

You might say the repetition is the obsession and the chromaticism is the torment.

Check out how the more tormented lyrics seem to melodically descend – like an introverted, tormented soul. For example – ‘silence of my lonely room I think of you’, or ‘why is it so?’. And perhaps you can see other lyrics such as ‘That this longing for you follows wherever I go’ as having a subtly ascending quality which reflects a feeling of yearning. Especially the ‘Follows’ – B to C – that’s an unusual moment where you’ve got a tense note right on the downbeat – that’s emotionally charged. As is the climactic bit – ’til you let me spend my life making love to you’! So the lyrics are full of the tension between hope and despair – classic opposites.

Also, overall there’s a juxtaposition between the general falling chromatic melody and a hidden ascending melody that loosely goes Bb Db D Eb. (Bb on the A sections, Db at the start of the bridge, D ‘love to you’, Eb at the end)

So now you know all that, you could take any one of those ideas and use it to write a tune, or maybe it might help with improvising on this tune. So you can play from the feeling, or any of those ideas: opposites, contrast, major/minor, ascending/descending, repetition/chromaticism, obsession and torment!

By doing this you make the piece mean more to you, so you’ve got resources to draw from to build your interpretation.

I think that’s a vastly more interesting place to start from than: ‘I’m using lydian and then the altered scale’.

So, when somebody asks you, ‘What are you using on the A section?’, you should say, ‘Obsession and Torment’.

*Ok, maybe he didn’t think any of this stuff, and it’s all analytical nonsense (I’m firmly in the camp of thinking he knew exactly all of this). That said, if any of this nonsense makes you write a tune, or play, or think differently, then it’s useful nonsense.

Learn 10 classic standards plus how to comp and improvise freely