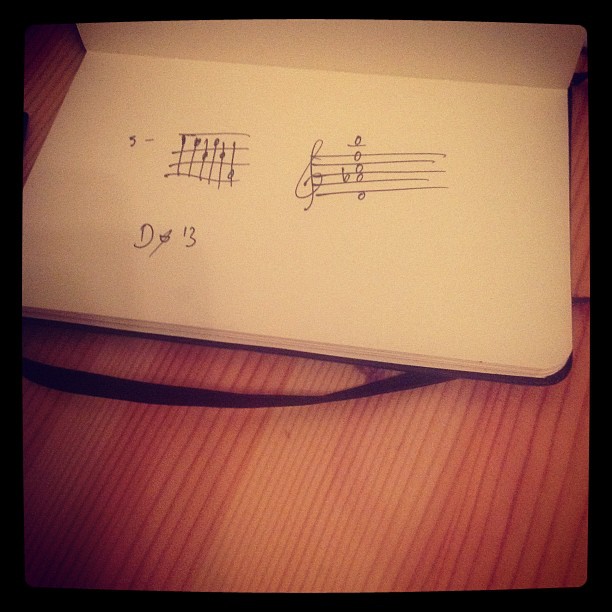 “What the hell else can I do with a Minor 7 flat 5 chord? Locrian Mode? Ok, that sounds weird, I’ll maybe stick to chord tones…”

Let’s start here with this D-7b5 chord with a natural 13th on the top that I really like.

It’s a great chord for making you poor, and confusing the old man and the dog ;)

What’s the difference between a rock musician and a jazz musician?

This here chord is from the C Harmonic Minor scale, it’s like a *super bright* version of the II chord in a minor key. I find it really useful in something more modal like Joe Henderson’s tune ‘Inner Urge’, for example, where you’ve got F#-7b5 for four bars.

Using this structure (on the 9th fret), or even just that natural 13th on that sound is an interesting alternative colour to use.

Another way to explore the different colours available on a given chord type is to take the essence of the chord: (in this case) m7b5 = 1 b3 b5 b7, and then go through some of the other options for the remaining degrees of a scale: the 2nd, 4th and 6th.

That gives you these scale possibilities:

There are, of course, other scales you could use, but these are some sounds to have a go at for now.

Learn how to unlock the amazing colours in each mode, with tons of examples to play

Finally, I’ll leave you with Joe Henderson playing Inner Urge. Check this out and see if you can figure out how he’s approaching that F#m7b5 chord..